The Geometric Structures of Chess as a Catalyst for Creative Composition 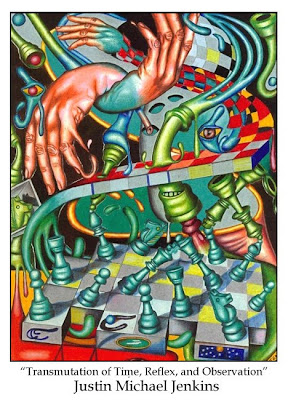 Ever since i was old enough to recognize the names of each piece, i have been naturally drawn to the game of chess for many reasons. This particular game, above all others, was exactly what i would gravitate to in a most curious way as a child living in upstate New York. Something about this game kept me searching for more as my mind raced with a curious fascination into the myriad of geometric structures and unique principles that, to me, seemed almost perfectly in harmony with life and the universe itself.

As i learned the unique laws of each unique piece, i quickly realized that the game could present each player with an infinite number of possibilities and the resulting outcome of these, when both sides clashed, could pave the way for fascinating structural combinations that got even deeper as the game progressed. These perplexities almost seemed to create an insatiable hunger that my mind could never satisfy and thus began my journey into the study of this game and the resulting inspiration that would be the ultimate catalyst for many of my most intriguing works of art.

As i grew older and approached my teen years, the game became a primal hobby that would assist me in my studies as an artist. I quickly and naturally relied on the game as a core foundation for the various structure associations that i was drawn too as i worked on my abstract and surreal style of art. Studying the various counter angles, attacks, and tactical strategies that consumed my thoughts created an immense amount of bottled up analytical inspirations that screamed for a release. My mind was always of the cerebral sorts and would go to the extremes of analyzation and feeding this elemental nature within by using the game of chess built up heavy reserves of creative forces that were transferred outward through my art. The game was essentially providing the resources for the analytical foundations within my mind and creating a supply and demand of inspiration that had no choice but to be expressed in a human way.

Being that i was a creative soul as soon as i was born, finding the game of chess was like finding that mysterious muse that has benefited me my entire life and has created interesting glimpses into mathematical worlds that are very closely related to the creation of life and to the creation of a new work of art. One of the many reasons i have so much passion for creating is that it somehow makes my analytical mind feel at home in a safe place where i know i belong. It challenges me to balance certain areas and find interesting ways of fusing inner and outer realities that are in absolute harmony with one another. The game of chess, which i have found through years of research and study, gives creation a certain blueprint that can manifest in so many fascinating ways like the uniqueness of each galaxy within the universe. The infinite opening, middle, and end games that blossom from each move on both sides ultimately create distinct patterns that mirror the patterns of movement and structure of life on earth.

Just like a pawn attacking a knight creates a urgent response that also changes the forward structure and pattern of the game, splitting an object in half within a composition can also create an infinite number of possibilities to an artist both in objective and color applications. When two opposing forces collide in the middle of the board you can see the blending of two colors and objects as various pathways and mathematical posibilities begin to take shape. The microsmic patterns of one side begin to cross react with the patterns of the other and begin to unify themselves in forming this systematic melding of two minds at work. The interesting thing is, as the opposing thoughts of two players try to attack and defeat the king of each opposing player, an almost intuitive and harmonious fusion of analytical ideas begin to transcend each others own unique strategy and create one larger creative force which mimicks the act of artistic creation. As the artist adds more color, lines, and form, the work as a whole begins to take on a life of its own that is somewhat outside of his or hers personal control. The work begins to create itself like a cosmic machine and everything works in synchronicity in a grand display of supernatural energy that parrallels this inherent end result within a game of chess.

The act of creation guided by one artist or a game of chess played by two players each has its own unique structural outcome that comes to a climactic crescendo in which an outside force inevitably begins to assist in the mechanical and systematic flow of the creation by the creator or creators. The game of chess provides essential clues and outcomes within the microcosmic strategies of both sides that translate into a macrocosmic fusion that transcends the mathematical laws of reality. A sublime and poetic state of motion and harmonic structure becomes more than the game and the players. This transcendence that goes beyond analytical structures and probabilities becomes an inspirational catalyst for creation and has been my trusted muse for many years as an artist.

To view my chess art collection please visit here:
http://www.imaginativepencil.com/chess.html
Posted by Unknown at 7:30 AM No comments: